The Trainers at Haras Dos Cavaleiros share a common love of the Lusitano horse breed. Their mission is to breed, train and campaign the Haras bloodline of Lusitanos and to promote the sport of working equitation in the USA.

A Portuguese native, Tiago graduated with top honors from the Portuguese School of Equestrian Arts. Following graduation, Tiago was mentored under top Trainers including Jeanette Jenny and Jorge de Sousa of Companhia das Lezirias. A gifted working equitation and dressage trainer and clinician, Tiago is currently head trainer at Haras Dos Cavaleiros in Magnolia, Texas, where he also manages the farm’s Lusitano breeding program. Prior to joining Haras Dos Cavaleiros in 2010, Tiago worked with several of the best regarded breeders in Portugal, including Santa Margarida and Jose Joao Dinis. There, he developed a vast knowledge of the Lusitano horse and the bloodlines forming the foundation of the breed. Tiago currently shows at the International Level of Working Equitation and Grand Prix Level Dressage. His show record includes a number of championships and awards,both in Portugal and the United States including Best Presenter in Golega in 2010, many in-hand wins at IAHLA National Shows, and multiple Working Equitation championships.

Growing up on her family’s horse farm in Maryland, Dori Johnson achieved her A rating in Pony Club early on and has successfully competed in Working Equitation, Polocrosse, Dressage, Show Jumping, Eventing, and Mounted Games. Dori has competed internationally numerous times representing the United States, twice for Mounted Games in England and Australia, and multiple times for Polocrosse, two of which were at the 2011 and 2015 World Cups held in England and South Africa respectively. Her personal horse was named Horse of the Year for 2016 by the American Polocrosse Association. She has trained and coached in satellite programs abroad for international clientele in the United Kingdom, Australia, Canada, and New Zealand. For many years, she has studied under Daniel Stewart (USET Coach, Sports Psychologist, and author) and is a head coach for his Ride Right program where she is accredited to teach aspects of Rider Fitness and Conditioning, as well as Equestrian Sports Psychology. Dori happily shares her vast knowledge of horsemanship while continuing to build her repertoire, learning and training in the Working Equitation and Dressage disciplines under Jorge de Sousa.

In Portugal, the Lusitano is used in every equestrian activity, from dressage and working equitation to hunting, mounted bullfighting, and farm work. Though we participate in every discipline and have won the highest awards in many categories, Haras Dos Cavaleiros aims to specialize in working equitation, the maximum versatility discipline, which is based on the traditional riding of major European countries. It is a contest featuring field elements such as the gate, bridge, zig zag, and an optional cattle handling phase. The horse for this discipline must be agile, fast, and above all have a very good mind because the obstacles are diverse and represent challenges typically found in the field. Several countries such as Italy, Spain, Portugal, Germany, Sweden, England, France, Holland, Mexico, Belgium, and Austria have hosted international competitions in Working Equitation. Through sponsorship, enthusiasm and example, the goal of Haras Dos Cavaleiros is to help introduce and nurture development of this exciting equestrian discipline in the United States. 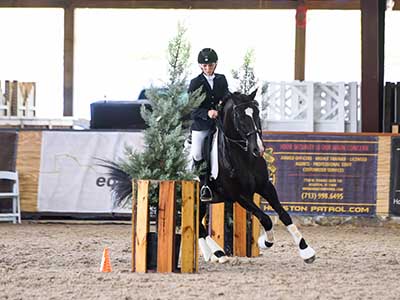 Each competition includes four phases and several levels of competence from Novice to Advanced. At the upper levels, it is mandatory that the horse be ridden with only one hand. Dressage: The horses enter a 40x20 meter rectangle. Depending on the level of competition, the horse performs a Dressage test of varying difficulty with competence assessed by a panel of three to five judges. Ease of Handling: this is a gymkhana-type event in which horses encounter obstacles similar to those found in the field (e.g. bridges, gates, and so forth). The manner in which the horse transits the obstacle is scored by the judges, including agility, submission, working attitude, and ease of movement and handling. Speed: The speed phase involves the same obstacles encountered in the ease of handling phase, but with the objective of going through the obstacles as quickly as possible without picking up penalty points. Cattle Handling: The cattle handling phase is performed by four riders whose scores count as a team. The task consists of separating a herd of cattle into two groups, which have been defined in advance. 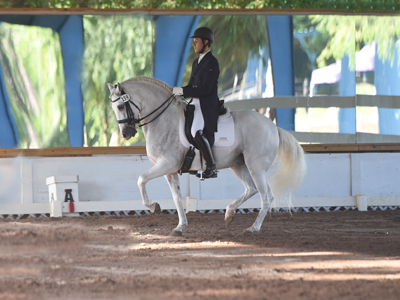 Dressage is a French term meaning “training” and its purpose is to develop the horse’s natural athletic ability and willingness to work making him calm, supple and attentive to his rider. Currently, competitive dressage involves nine progressive levels incorporating multiple tests within each level. Special tests are also written for musical freestyle, sport horse breeding and performances incorporating multiple horses and riders. Tests are revised every four years by the United States Dressage Federation, the United States Equestrian Federation (USEF) and the International Equestrian Federation (FEI). Competition occurs in a regulation size arena with specific apparel and equipment all regulated by the USEF. Judges are licensed by the USEF and the FEI and are assisted by scribes who write down the judge’s scores and comments during the test. Success in dressage is dependent on the rider’s position and ability as well as the horse’s training and natural gaits. Because of the steady progression of the training, many horse breeds can be quite successful. Watching dressage can be very exciting, especially the musical freestyle rides or tests at the FEI (highest) levels. Dressage is one of the Olympic equestrian sports. The modern Olympics commenced in 1988 with equestrian events, and the “military test” first included in 1900 which evolved into the separate Olympic disciplines of dressage, eventing and stadium jumping. In dressage, the rider uses his weight, legs and seat to influence the horse. These are known as the “aids”. In order to use the “aids” correctly, the rider’s body must be aligned and balanced. From a side view, the ear, shoulder, hip, and heel of the rider should be in a straight line at the halt. From the back, the rider should sit evenly on both seat bones and the length of the stirrups should be the same. By shifting his hips and his weight, the rider can ask the horse to move in different directions and step into different gaits. In simplest terms, the rider should have his hips do what he wants the horse’s hips to do and his shoulders do what he wants the horse’s shoulders to do.

The Haras Dos Cavaleiros facility, located in Magnolia Texas, is a premier Lusitano breeding farm and horse show venue. The gorgeous grounds and facility includes the training barn complete with 44 stalls. There are currently 15 stallions in training along with many up and coming youngsters at various stages of training. At Haras Dos Cavaleiros, there are three arenas, two covered and one outdoor. The main arena is 50 mts by 80 mts while the other two arenas are 30 mts by 70 mts.
In addition, there are 100 lighted, 10 by 10 ft. exhibitors stalls with wash rack. 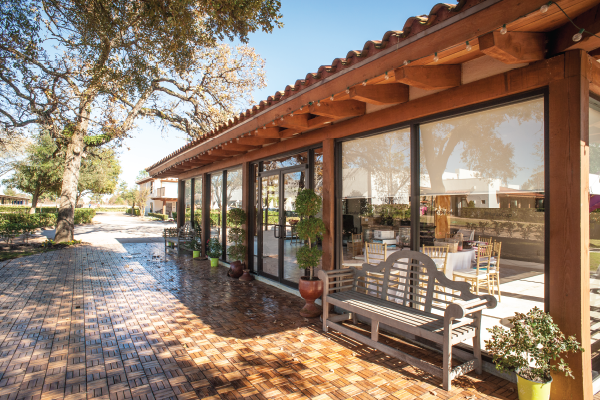 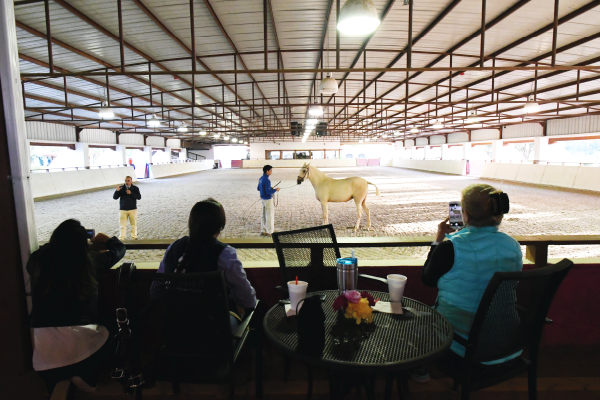 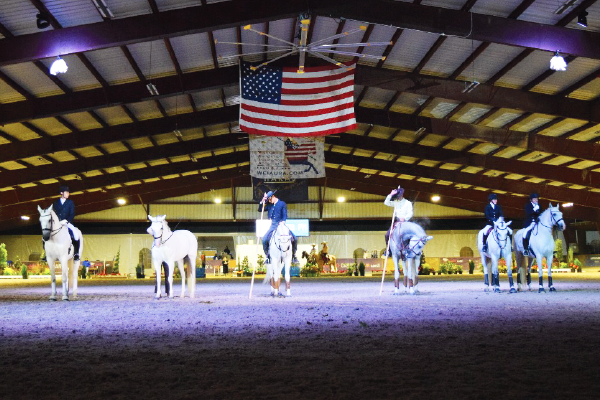 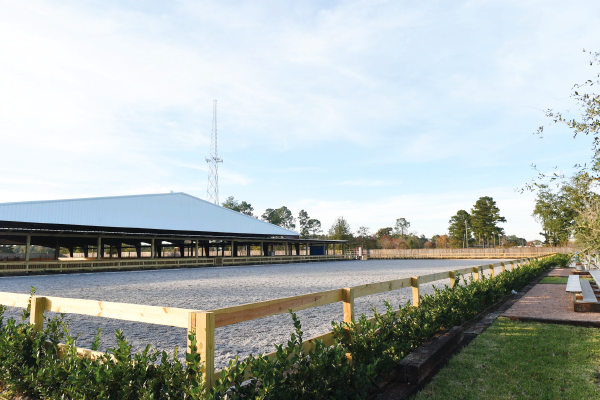 GGT FOOTING WITH EBB & FLOW
Measures (100 ft. x 230 ft.) 23,000 sq. ft. This picturesque full-sized arena is perfect for warm-up and competitions with plenty of covered and uncovered seating for guests. 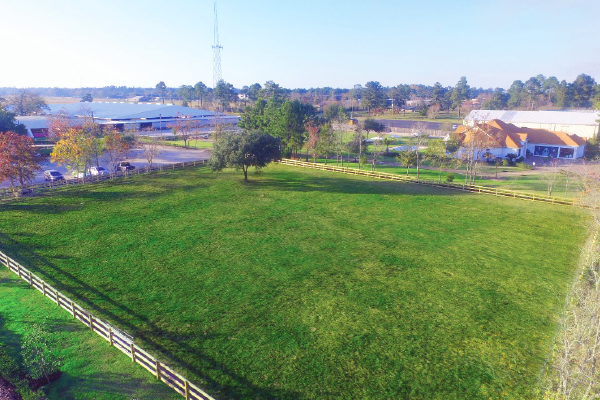 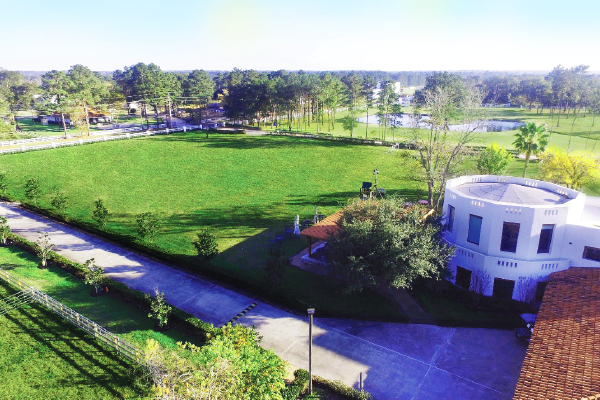 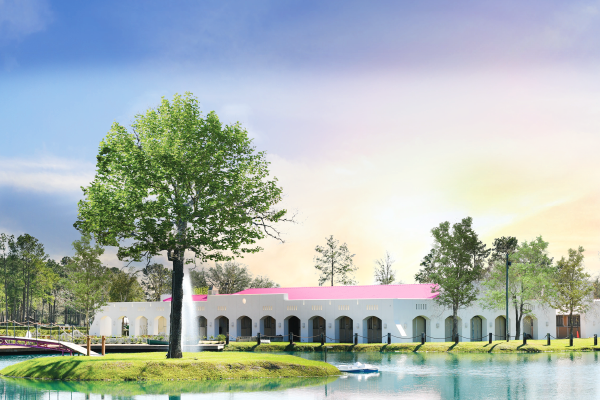 100 stalls (10 FT X 10 FT) available per show, with entrance to the main arena, 60 permanent stables located near the main square 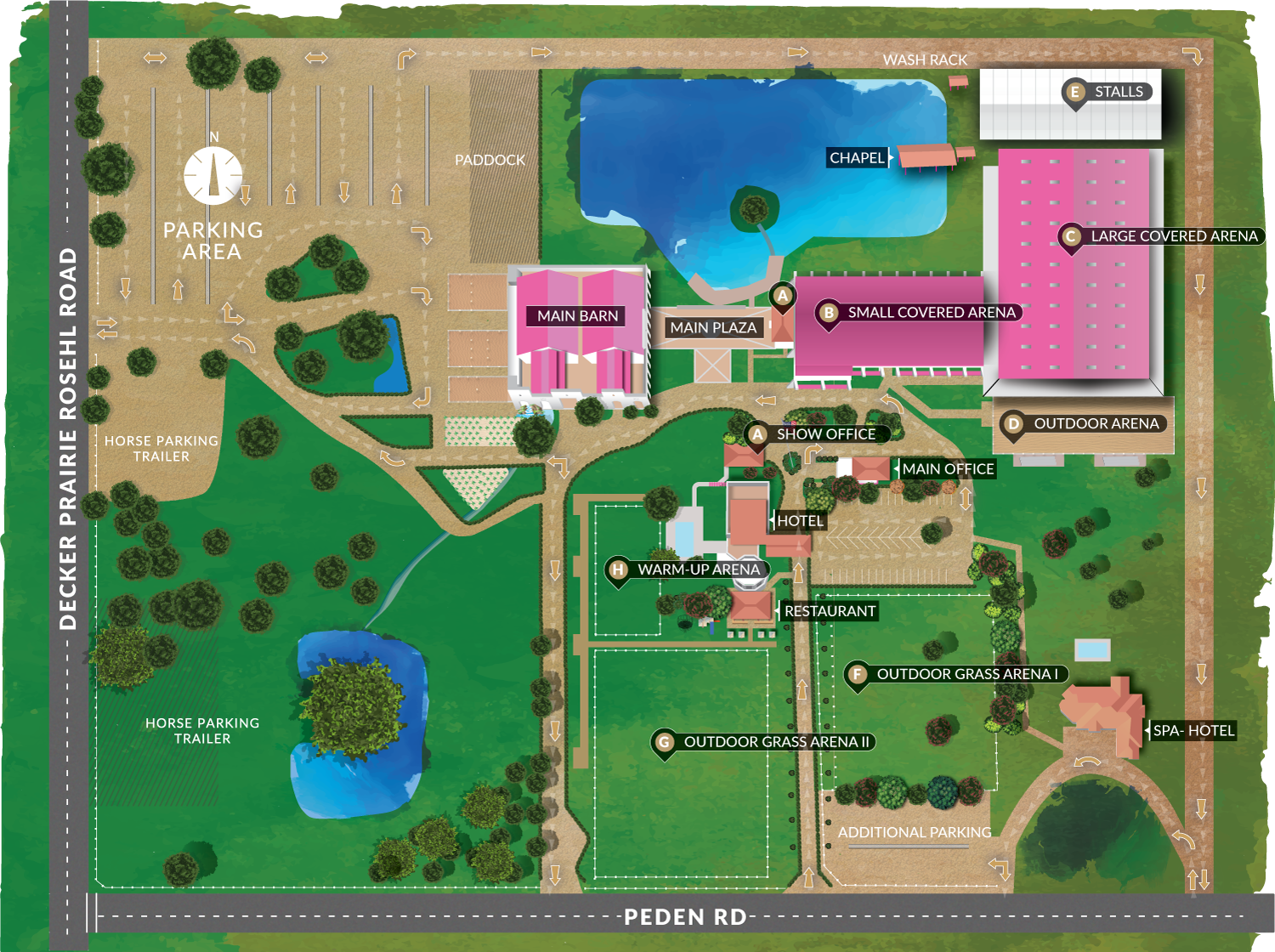